​He is a published author of the award winning “The New Book of Plots” on the use of narratives in oral and written forms and the co-author with Elizabeth Ellis of the critically acclaimed, “Inviting the Wolf In: Thinking About Difficult Stories” on the value and necessity of stories that are hard to hear and harder to tell.

He was a 1998 Bush Foundation Leadership Fellow and the recipient of a 2016 National Storytelling Network’s Lifetime Achievement Award. 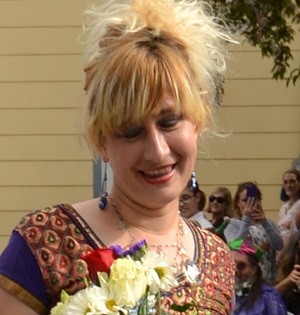 She works in a variety of traditional mediums, including gouache, watercolor, acrylic, oil, ink, charcoal, and collage. Her work has been shown in over a dozen venues, including galleries and curated art shows.

Her captivating illustrations helped to bring to life the Shakespearean sensibilities of Go Fork, Ye Crooked Spoon, And Let Me Live My Knife! 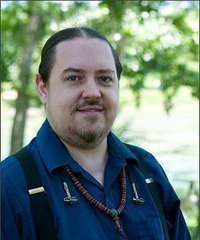 Scott Michael Stenwick was born in Minneapolis, Minnesota in 1969. A natural storyteller from early childhood, he was drawing pictures and assembling them into simple narratives before he could read or write. He was exposed to computers in 1977 when his elementary school acquired an Apple II, and has been writing and programming ever since.

He attended Saint Olaf College in Northfield, Minnesota and graduated in 1991 with a degree in psychology and a paracollege concentration in mathematical modeling. In college he worked on two novels in addition to his studies but eventually decided that neither was suitable for publication without substantial revision. After graduation he went to work in the computer field and built a career as a software developer and information technology consultant.

His debut novel Arcana was released by Pendraig Publishing in 2009. He is also the author of the Mastering Enochian Magick series, non-fiction books on the Enochian magical system of John Dee and Edward Kelley. His blog, Augoeides, can be found here and his author website can be found at scottstenwick.com.

Sheila Marshall is the founder of Moonfire Publishing and the author of a series of entertaining dining and compatibility guides featuring vampires, zombies and werewolves. The books come complete with colorful and imaginative illustrations, and are full of tasty recipes. These seriously humorous guides combine the art of personality typing and dating advice with a delicious and extensive collection of recipes, including appetizers, undead breads, main courses, sides and decadent desserts.

As a small child, her father related how he once spent two and half days traveling by train and singing songs with Bela Lugosi. This adventure captured her imagination, and these books are dedicated to that memory. She is a former Chicago restaurateur and currently a licensed psychologist and social worker, in practice since 1985. She has created therapy programs in creative writing and the arts, and brings her keen insights into personality types to this series of monster dining and dating books.