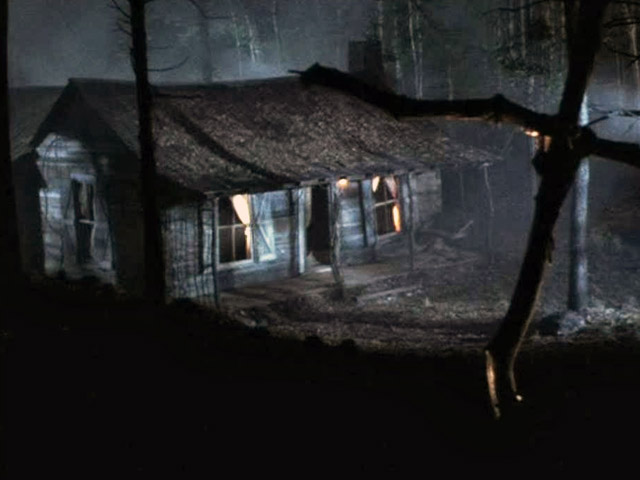 Here’s an item of interest to horror movie buffs everywhere. A piece of the original cabin that was used for filming Evil Dead 2 is now for sale on ebay. The cabin was constructed is 1986 for exterior shots that couldn’t easily be done with artificial sets. In 2016, what was left of the broken-down cabin was removed from the property in the woods. And now, if you’re so inclined, you can buy a piece of it.

“This is the actual exterior wall from the front upper left side of the original Evil Dead II Cabin,” the ebay listing says. “In relation to the movie, this piece would have been above the clock and cellar door. The wall is fully intact. It is approximately 16 feet long and pretty heavy.” The piece was retrieved from the woods outside of Wadesboro, North Carolina in April of 2016 by Evil Dead fan Mike Pasquale, who runs the Evil Dead Workshed website.

The Evil Dead 2 production crew rolled into Wadesboro in the summer of 1986. They set up shop in the empty J. R. Faison Junior High School building, where sets were constructed for interior shots of the cabin where Ash (Bruce Campbell) would face off against the grotesque deadites unleashed by incantations from the Necronomicon. The school wouldn’t cut it for the exterior shots, though, so the cabin, as well as the work shed where Ash hacks up his possessed girlfriend with a chainsaw, were built in the woods outside of town.

Pasquale first got in contact with the current owners of the property in 2011 hoping to explore what remained of the iconic filming location. “The owners are elderly people that have not seen nor do they care to see any of the Evil Dead movies,” he wrote. “In fact, when talking to the owner, he walked into the woods to see the site for himself for the first time after owning the property for the past 18 years.”

In 2016 the decision was made to clear out the woods. They planned to remove trees for firewood and drastically change the landscape, which would result in the destruction of the Evil Dead set pieces. Pasquale was given permission to recover as much of it as possible. He spent two days in the woods with a friend for what he called Operation: Evil Dead Uproot, labeling every plank and frame board, dismantling and loading anything salvageable into a 24-foot moving truck.

If you’re interested in owning a piece of movie history, the ebay listing can be found here. The auction ends in four days. The auction description does not mention whether any hungry zombies or remnants of magical curses from the Necronomicon come with the wall section.